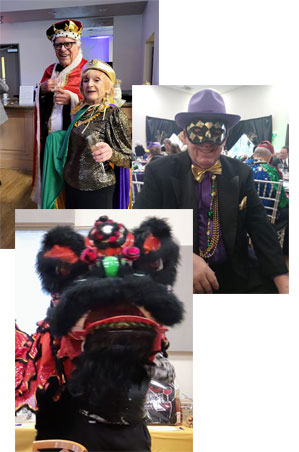 It was a super good time, and no one got slapped.

At this year’s Mardi Gras Ball, held on March 27 at the Fullerton Elks Lodge, about 110 guests had plenty to celebrate, and they really let their hair down. After all, it was the first big event Friends of Jazz held since the pandemic was declared over. And it was all for a good cause: keeping music in the schools. So, this time it was fun to wear a mask celebrating good times instead of covering up during bad times.

And boy did they celebrate! Two bands in two rooms! Plenty of dancing, parading, eating, drinking, and just plain merriment!
At 5pm, doors opened for cocktail hour, and guests were greeted by the CSUF Titan Ramblers (Bill Cunliffe, director) playing in the New Orleans Room. They were served delicious hors-d’oeuvres, given a drink ticket, and had a photo taken while the band entertained. Other gifts included a commemorative wineglass, ballpoint pen, and a small notebook. They also got their first look at the array of silent auction items beautifully displayed in numerous baskets and bought tickets for a 50/50 drawing and for bottles of wine.

Dressed in their finest clothes, masks and costumes, guests joyfully joined in the krewe parade led by FOJ’s dragon and the Titan Ramblers throughout the lodge, dancing and waving beautifully decorated parasols, while vocalist Barbara Johnson sang “When the Saints Go Marching In.”
In the Main Ballroom, the Fullerton College Dance Band, directed by Bruce Babad, provided some great entertainment for listening, and there was plenty of dancing. Of course, what ball would not be complete without the introduction of the king and queen, Nick and Dottie Batinich, whose reign began at the 2020 Mardi Gras ball just before the pandemic and will continue through 2023.

Jennifer Hart, former Director of School Programs, received a certificate of appreciation from FOJ President Colleen Wadsworth, for managing and teaching the school recorder program for many years.

After guests enjoyed a delicious dinner, the band played on, and Fullerton College J-Train vocalists, including their director, Jamie Shew, sang a number of crowd-pleasing jazz standards.

After the ball was over, CSUF and Fullerton College student musicians jammed together in the New Orleans Room.

Fortunately, Friends of Jazz raised enough money to continue to offer their programs to the community.

Many thanks to the National Charity League gals and their moms for helping to make the event a success. Kudos to Larry Arthur, Mardi Gras Ball Director; Don Dyer, Co-Director; Pam Appleman, Auction Chair; Wayne Mason, Master of Ceremonies; and to the Mardi Gras Committee, for tirelessly putting it all together.

Friends of Jazz, now in its 23rd year, is supported by the Johnny Carson Foundation.